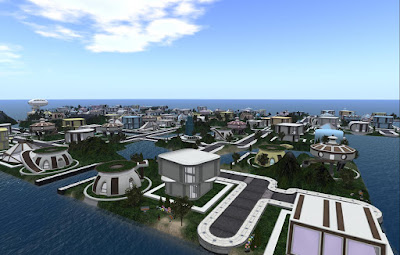 Last month, a number of new sims under development by Linden Lab were spotted, but no one but the Lindens and the Department of Public Works knew at the time what purpose they would serve. yesterday in the Linden blog, the Lab finally revealed the purpose of these sims and a name: Horizons. For those who guessed these were going to be new Linden Homes, you were partially right. 36 of the sims have been designated the Horizons Residential Regions. 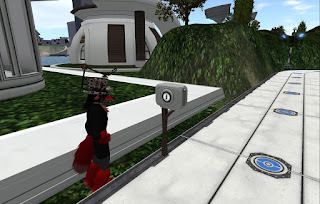 Unlike a Linden Home which has a static look, the owners of these plots can alter the style of house with a selection of several possible furutistic-looking choices. The house itself is described as having zero land impact. The land itself cannot be terraformed.

The homes are apparently not a bonus for Premium accounts. The Linden blog states they  will be auctioned off to buyers on Friday November 18. 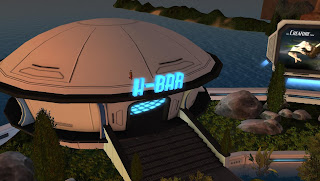 Besides the Horizon Residential Regions, there are a few "Community and Info Hubs" among them, "The first of the two, the community hubs, are designed for Residents to use for their community groups, meetings, and events. These beautiful hubs feature a nice, serene environment to be social and enjoy alongside all your favorite fellow Residents. The second of these two areas are the info hubs. These hubs feature land information, as well as an easy access portal that takes you directly to the mainland experience itself. There are also links to the wiki available which provide access to helpful knowledge regarding the housing system. A mailbox demo and building demos are set up to show you the controls featured in the new housing system. Residents will also find any update information here regarding the housing and mailbox system!" 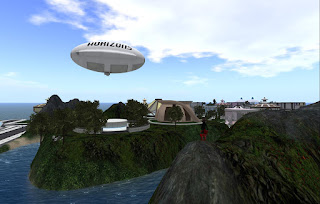 Daniel Voyager wrote that the new sims were located just north of the adult continent of Zyndra, visible from Shell Beach . But as it turns out, the sims can be accessed by both flying in from the sim and teleporting over. The area had a general futuristic feel to it, with some variations in the terrain and occasional decorative structures in between. So feel free to explore these new areas.

In the middle of the Horizons Residential Regions, there were six sims for a "Horizons Experience" game by Linden Lab. This will be discussed in another article.