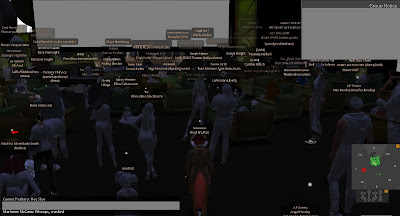 Over the course of Monday Tuesday and Wednesday, it's been revealed that Linden Lab was increasing the amount of prims that mainland sims could handle. The questions people were asking the most were would Private Estate sims be included, and just by how much would prim capacities be going up? But Linden Lab wouldn't say on those matters until yesterday, Thursday November 4 at 2PM when Patch Linden and Saffia Widdershins hosted an audience of about a hundred residents. Dropping in at 1:40PM, the place was already packed, with lots of grey lingering for a while. 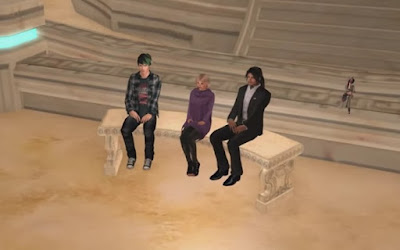 Eventually, Saffia asked everyone to click on the white screen, asking people to check out (this video) if the screen wouldn't work for them. The recording was of a chat Saffia and Designing Worlds co-host Elrik Merlin had with Patch Linden (Dee Linden was there, but spoke little). Patch would go on to state that yes, the Mainland sims were getting a prim capacity increase, and so would Private Estates, homesteads, and openspace sims. Patch Linden confirmed reports on the Linden Blog and elsewhere that Mainland sims were in the process of having their prim allowance increased, saying it was going up through their usual weekly restarts. For Private Estates however, the change would not come right away but "within a couple months, could be sooner, hopefully not later."

Patch also mentioned that eventually full Private sims would have the option for even greater capacity, but for a price. They could have their prim allowance boosted to 30,000, but only if a $30 fee was paid up front and a monthly $30 fee charged in addition to the usual monthly tier.

Patch stated Linden Lab would announce when they would be ready to boost Private sims and offer the further increased capacity on separate dates in the future.

Would there be a downside? Patch stated there was the possibility of older computers taking more time to process the extra prims, but assured Linden Lab had been doing much testing and felt the extra lag should be minimal to most.

After the meeting, I asked Saffia about these changes, she answered, "I'm really excited by this. I think it opens up huge possibilities for creators - both in building more objects and in building with better use of LOD."

Inara Pey of Modem World posted about the time of the meeting an interview with Patch Linden about the Prim increases. Linden Lab would also mention it on their latest blog post.

And so, we have the full story on a topic that's gotten Second Life abuzz all week.