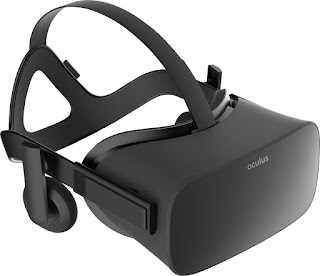 Most regular users of Second Life have probably heard of Oculus Rift, the Virtual Reality headset that's been under development for a few years, which has long gotten the attention of Linden Lab which soon worked to make it compatible with Second Life, and was bought up by Facebook two years ago. Also about two years ago, one could place an order for a first generation unit for $350, and there were hopes for a more economical model for when it officially hit the market.

Finally the other day, I saw one for the first time at my local Best Buy. Finally the Oculus Rift headsets weren't just something being talked about on the computer, but available for me to get in the store. But as it turned out, the price hadn't dropped from two years ago. It was $599.99. They were selling a few brands of (low power) computers for less than that. If one adds the Oculus Touch hand controllers, the price goes up to almost $800.00.

For someone making a hundred thousand a year, this probably would be no big thing. But for a blue collar worker like me making less than a quarter that, the cash would be harder to come by. It is noteable to mention that when Linden Lab CEO Ebbe Altberg was demonstrating Sansar to reporters last month, he did so using the Oculus headset and hand controllers.

Granted customer reviews are very good, rated an average of 4.4 out of five of over a hundred reviews with 87% saying they would recommend it to a friend. But for someone with a tight budget, it may simply be out of reach. At least until the price goes down.