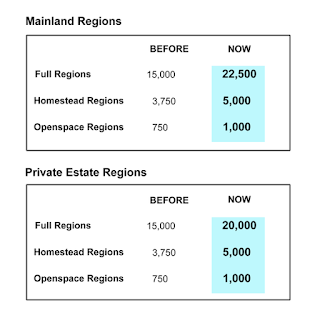 On Thursday November 3, Linden Lab announced that they were in the process of increasing the prim limits of Mainland sims. They also stated that while private sims would also be seeing a similar increase, it would not be right away, but "within a couple months." On Tuesday November 29, the Lab announced that they were finally starting these increases.

As of today, we are extending this benefit to Private Estate Regions. Full Regions, Homesteads, and Openspace Regions on Private Estates will get a 33% increase in Land Impact allowance at no additional charge! Now everyone will have more prims to enjoy!


As with the Mainland sims, the private island prim capacity increases are being done through their weekly rolling restarts. So the process should be done by next Monday.

Linden Lab also brought up their plans to allow private sim owners the option to boost their prim allowance by an additional 10,000 to 30,000, saying it would be "starting next week" and details would be soon. In their announcement earlier this month, they stated it would cost a $30 USD fee up front and a monthly $30 USD fee thereafter.

Among the first private sims to benefit from the boost is Purrfection Estates, best known for the "Happy Vixen" beach club. There was a general feeling of optimism that night in chat groups, though one person did express reservations, wondering if a few people might go overboard and engage in "prim wars" over the holidays, decorating their places to the max.

Do you the readers have any stories about how you, or your neighbors, are taking advantage of the prim capacity increases, or not? If so, let the us at the Newser know.
Posted by Bixyl Shuftan at 6:02 AM