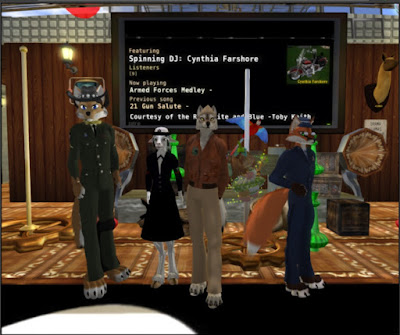 Friday Night was the Veterans Day event at Club Cutlass. Cynthia Farshore was the DJ for the event, playing songs that were tributes to certain battles, such as the Battle of New Orleans in 1814, to songs that had been sung by the soldiers of the Mexican and Civil Wars, but recorded only years later when the technology existed, to songs made during the World Wars, to rock tunes of the 60s questioning the Vietnam War, to songs about 9/11 and recent conflicts in the Middle East.

Near the end of her set, Cynthia, herself a Navy veteran, called the others whom had served in the military: RECoyote Mindes, Shockwave Yareach, and Zorro Wuramunga, up to the front of the dance floor. She would take this screenshot while they four were standing there.
Posted by Bixyl Shuftan at 6:00 AM