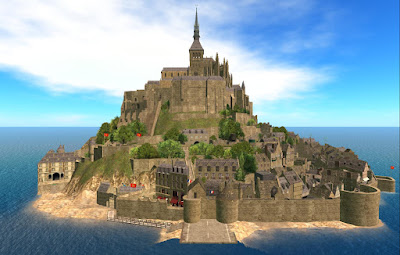 Mont Saint Michel is back on the grid. 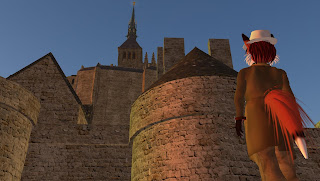 It was several weeks ago that this replica of a historic structure in northwestern France, a sim once listed as one of the top ten places based on real life locations to visit in Second Life by Newser writer Becky Shamen, had vanished from the map. It was in September 2015 that it's owner Moeka Kohime announced that she could no longer afford to keep the place afloat and it would soon be closing. But the sim would remain standing for about a year longer before finally fading away, seemingly gone for good. Only two times before in the thirteen year history of Second Life, with Svarga and the SS Galaxy, has Linden Lab intervened to save a sim from vanishing into the virtual nether.

Taking a look at the information about the sim in the viewer, a look under the "Covenant" tag revealed an owner other than Moeka: Mogura Linden. Mogura Linden made news last year for being the founder of the "SS Galaxy Preservation Group."  So she's involved with what seems like transferring the ownership of the sim to Linden Lab. 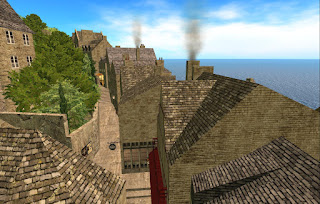 I was able to visit the sim and look around a little. Some of the shops there are still active, at least for now. And there were some chimneys with smoke coming out of them that I hadn't noticed before. Did I overlook them earlier, or something just added?

It's unclear whether or not the transfer of ownership will mean the sim will be temporarily closed for a while. So those interested in seeing the place again are advised to drop by sooner rather than later. But it's good news that this picturesque sim will be around for good.