Cartoon of the Day: The Trump Chicken 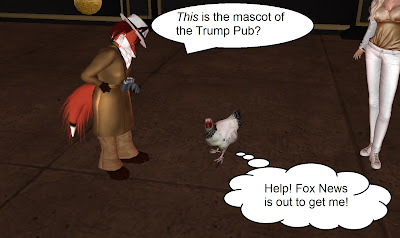 Taken at the Trump Pub on Election Night. This might be the same chicken who showed up at the Clinton HQ during the first Presidential Debate. There's a bit of an irony here as in television media, Fox News has a reputation for being the most favorable for Republicans (though a few on the Far Right I've talked to have grumbled it's like calling them the most reformed inmate in a prison).