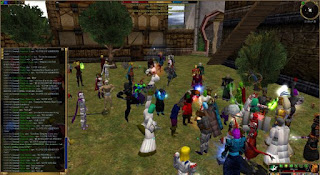 Yesterday, January 31 2017, was the final day for players of  "Asheron's Call." Developed in November 1999, close to the time of Everquest and Ultima Online, it was the third major Massive Multiplayer Online Role-Playing Game to be released. Developed by Turbine Studios and published by Microsoft until 2004, the game had a Fantasy theme in which players fought with swords and magic. Peaking in 2002 at around 120,000 players, it would eventually be overshadowed by "World of Warcraft." The game would see two expansions and eventually a sequel, "Asheron's Call 2," and was updated monthly. Originally needing a subscription fee, the game eventually became free to play. In 2014, Turbine announced the updates would be ending, save for bug fixes.

In December, it was announced the game would be closing on January 31, along with it's sequel, and no more new players would be admitted. A number of fans petitioned Warner Brothers, the last publishers of the game, to keep it running. But the company would not change their minds. On the last day, longtime players, and many whom had stopped playing years earlier but came back, gathered to share old stories and to say goodbye to one another. Eventually, the screen was full of players raising their arms in the air surrounded by pink energy, and vanishing, and each player getting the message, "connection with the server has been lost." Also going down would be the website, the forums, and the Facebook page.

Besides the video above by PC Gamer, many others would do their own recordings of the end, such as this one, and this. Others would post their comments online, "I locked the front door at work so I could go sit down and cry."

After 17 years, no more would the players log on.