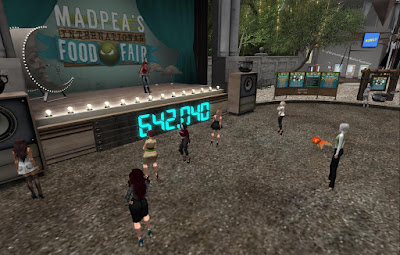 Madpea Productions, the company in Second Life noted for it's detailed games over the years, is running a charity event in cooperation with Feed a Smile, the Madpea International Food Fair. The event started on Saturday with musicians such as Shannon O'herlihy performing. Due to the lag, some attending watched from just past the sim border not far from the stage, or stayed near the TP point and donated to kiosks near there. 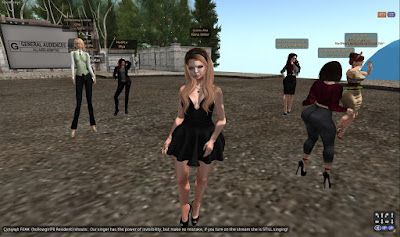 The "Queen Pea" Kiana Writer was among those at the Saturday events  On the event's webpage, the group stated, "Our goal is building a kitchen for impoverished school children in the Rhonda Slums of Nakuru, Kenya. The MadPea International Food Fair will raise funds for the kitchen with the help of some of the grid’s top designers, who will sell exclusive food-themed items and gachas throughout the event with 50% of all earnings going toward Feed a Smile. Additionally, donations will be accepted throughout the fair. The fair will be a full cultural feast; alongside the awesome shopping, live musicians and DJs will provide music at the festival’s Center Stage virtually round-the-clock."

By Sunday, the total amount raised had passed the one million Linden mark.

Madpea has done charity events before. In October 2015, they raised over a million and a half Lindens to help build a school in Africa. 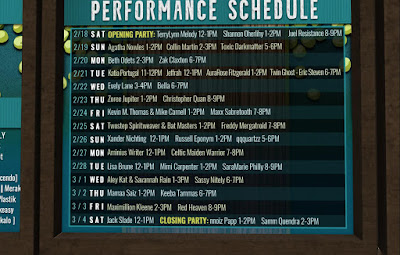 The Food Fair will have at least two performances every day, today having Beth Odets at 2PM and Zak Claxton at 6PM, with four performances tomorrow Tuesday February 21. The closing party will be on Saturday March 4 from 1-3PM SL time.

For more information on the Food Fair, and the latest fundraising total, check the page at http://www.madpeagames.com/events/madpea-international-food-fair/ . To see the event stage yourself, head to Harms Way (171/151/1234) .

*Update* According to Modem World, the "Live and Learn" charity, which gets a third of it's money through Second Life "Feed a Smile" fundraisers, the people Madpea is partnering with in this event, recently had their outdoor kitchen wrecked due to bad weather.  The new kitchen will be a sturdier and more hygenic indoor one.
Posted by Bixyl Shuftan at 6:04 AM