Rana Dexler of Survivors of Suicide 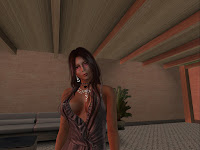 Depression isn't just simply "the blues," but a real illness. In Second Life, one can find support groups for this and other forms of mental illness. "Survivors of Suicide" despite the name isn't just for those who attempted the act or their friends and families, but for those who have or are recovering from mental conditions, as well as those whom know someone who is. Deaflegacy recently talked to one of  the group's staff, Rana Dexler. She had a few things to say about the organization.

Read Deaflegacy's article in People.
Posted by Bixyl Shuftan at 6:04 AM