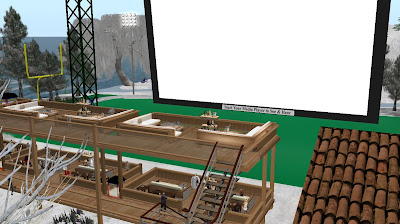 On Sunday late afternoon and evening, the Superbowl, the championship game of American football, took place in Houston Texas between The New England Patriots and the Atlanta Falcons. The Patriots were the favored team to win having appeared in nine Superbowl games while the Falcons were making their second appearance. The Falcons put up a good fight, 25 points ahead at one time, but the Patriots rallied and with the game forced into overtime scored the win.

Across the planet, 111 million watched the game, broadcasted as far away as Saudi Arabia and Nepal. As the game has become such a big television event even for people not usually into football, some watched it mainly for the commercials or at superbowl parties. One such party was here in Second Life at Aero Pines Park 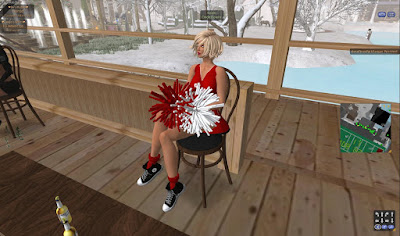 At one point, park owner Cindy Bolero was leading a squad of cheerleaders on the field. But technical difficulties ended up clearing the sim the field and screen were on. But people could still watch it streamed elsewhere on the Internet, people cheering on their team, or just hoping for a good game, which they got.

Aero Pines is best known for its horseback riding, but has several events a year.