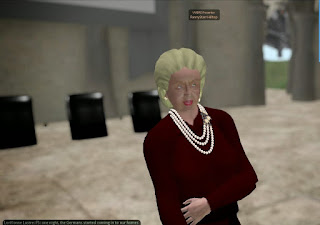 One of the oldest residents in Second Life is FannyStarr Hilltop, Fanny Starr in real life. As a Holocaust survivor, she has on occasion talked about her experiences in Second Life, such as in March 2015 when she spoke at the VWBPE conference. Later this month, she will be having another discussion. But it will be on Youtube, and not Second Life.

"We tried to have it in SL, too many people," Explorer Dastardly, FannyStar's real-life daughter, told the Newser, "At least 1000 or more on live Youtube that we know of. ... The sims would crash, so I asked Spiff, and one idea was Youtube live." As of now, there are no plans for an inworld location of any kind where the event will be discussed, "I wanted to use cookie, the amp theater, but only 40 avatars allowed. But on Youtube you'll be able to ask questions. We will have a moderator." 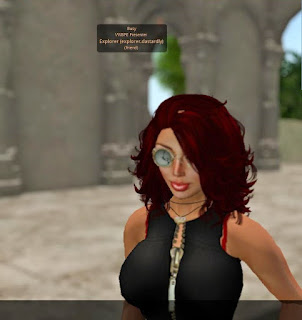 Despite the efforts of historians and people like her to educate the public, Holocaust denial is still an issue. "It's a very serious issue, on grand scale worldwide." She went on to say the problem wasn't just neo-Nazis and radical Muslims, but people in politics and business whom were either incompetent or just didn't care. She cited one Huffington Post news article about Amazon allowing the sale of books calling the Holocaust a "myth", and a Washington Post story in which this year's annual statement from the White House on International Holocaust Remembrance Day failed to mention the six million Jews whom were murdered. Of the later, she felt was probably a sign of ineptness rather than malice, "We don't know, but its caused a lot of fear and hate. We'll talk about that next Wed. night."

The event is on Wednesday, February 22 at 6:20PM SL time, with the link at
https://www.youtube.com/watch?v=0MuM7hRFZKo&feature=youtu.be

My husband I decided to carry on a painful legacy, and we wanted to fight Holocaust denial. I’m braver than the other survivors; I want people to listen. No one can attempt to identify the faith that humanity can learn from its mistakes. We use live technologies, and other live venues followed by discussions to promote awareness and understanding of the Holocaust from a living witness.

I have a mission to complete to tell the world what happened, especially to the deniers.

We cannot forget the blessed memories: My family, my late husband, and his family and my late son Morris. I cherish my daughters Hilda, and Helen. I cherish my son-in-law Irwin, my grandchildren and great-grandchildren.

Step 1. Click the link the arrow is pointing to
https://www.youtube.com/watch?v=0MuM7hRFZKo&feature=youtu.be

Any information shared by Fanny Starr and Helen R. Starr is protected by intellectual property and copyrights. Thank you
Posted by Bixyl Shuftan at 6:02 AM