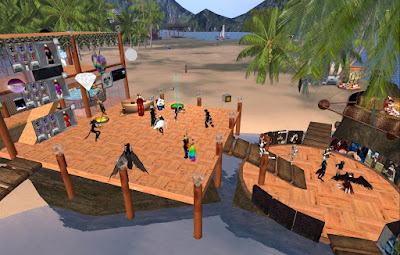 It's been a trying time for RECoyote Mines, one of the members of theSunweaver/Angels community. In the past, he had helped a few of it's members get new computers, as well as helping the land owners lower their tiers to Linden Lab by paying the fees. But recently he announced his mother was very ill with cancer, and had exhausted his savings. So Nydia Tungsten began organizing a couple fundraising efforts at the Happy Vixen beach club. On Tuesday January 31 was a special double event in which those attending dropped over 20,000 Linden dollars into a special tip jar. Also started at the Happy Vixen was a "Tail Sale," in which people stopping by could bid on two dozen volunteers for a date, or some other special service such as building, drawing, or writing. 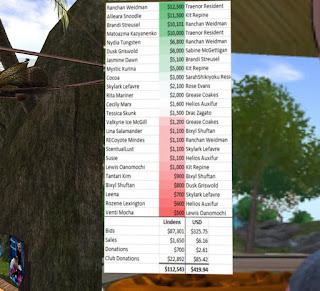 Thursday February 9 was the last day of the Tail Sale, and during the two events scheduled that evening, people dropped by not just to dance but make the final bids. People continued to remain after the scheduled events were over, and each of the boards was closed at a random time over the next few hours. The results were impressive. A total of over 87,000 Lindens had been raised in the Tail Sale, with four women getting bids of 10,000 or above: Ranchan Weidman, Alleara Snoodle, Brandi Streusel, and Matoazma Kazyanenko. Four more would get bids of 5000 Lindens or more: Nydia Tungsten, Dusk Griswold, Jasmine Dawn, and Mystic Xurina. Combined with the contents of the tip jar, which had gone up to close to 23,000 Lindens, plus the sales of the outfits made by Brandi for the purposes of raising funds for the event, and a few other donations, the result was 112,543 Linden dollars, or about $420 USD.

I want to thank you all for your help in helping raise money for our dear friend Reco, and with this first event alone we have raised $112,5111 L's total  THANK YOU ALL

But Nydia and the Happy Vixen club aren't done yet. Sadly, RECoyote's mother had passed away, which means funeral expenses. So she began organizing a "Personal Pin up Benefit Auction." While similar to the calendar auctions Nydia has held in the past, these would be for personal photographs of the volunteers and winning bidders. At most, these pictures can only be tasteful nudes with nothing more than a hug or cuddle. 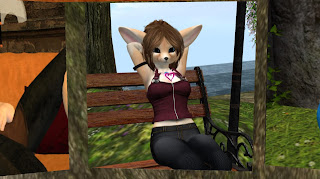 Yes we just had one, but funerals are so very expensive, our friend Reco  still needs us, so we are having one last event, come bid on these models for the chance to have your own personal sensual photo shoot that goes no where but to YOU! so this is a one of a kind photo for your own collection.

If you didn't win in the first auction your chances are better now.

Several people have volunteered for this second auction, some from the first one such as Nydia, Brandi, Matoazma (pictured), and Mystic, and a few whom weren't in the first. So if you're interested in a picture with one of the models, head over and made a bid.