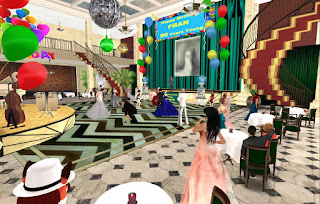 On Saturday February 18, Creations for Parkinsons was the scene of a 90th birthday party for Fran Seranade. The party actually got an early start the night before for a couple hours. But the main event was from 3PM to a bit past 8PM SL time. At one point, there were close to forty people crowded in the CP Swing Ballroom, which unfortunately resulted in me crashing before I could get a good picture. Yours truly would have to wait until later for a clear one without they grays and glitches. 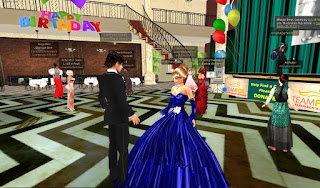 Barbie Alchemi, Fran's daughter, had stated her mother wasn't planning a party in real life. She would just enjoy the event with her friends in Second Life. The theme of the party was 40s sing and big band. And people either dressed in formal outfits, or in clothing that could easily have been of the era. There would be various live performers singing throughout the party, such as Max Kleen, "We had so many great performers here today."

While at the party, I would see the black and white photos of Fran and her family change like a slide show.  "Fran was the 6th of 7 children," Barbie told the crowd, "she was born in Brookly New York in 1927." Other pictures included her and a childhood friend, "they were both very limited sight and were considered blind at that time," and her high school photo, "she was the first in her family to go past elementary school and graduate." 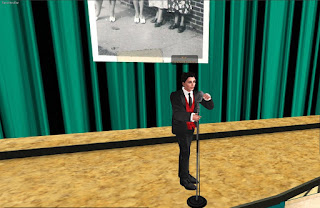 While most of the musicians were experienced performers in virtual reality, one was making his Second Life debut as a singer: Ron Rosa. A singer in the style of the "Rat Pack" yours truly got a couple requests to mention him in the article, saying for a beginner he was too good not to name, " his voice is nuanced and spot on.  I think he is going to really do well when he gets tuned up."

Following Ron, it was time for the party to wind down. And Fran herself was ready to head to bed herself, "Good night everybody! Thank you all for a GREAT night!!!!!!!!"

Creations for Parkinsons raises funds for Team Fox, a Parkinson's charity. During the course of the party, a substantial amount of Lindens were raised.

Creations for Parkinsons has events on a daily basis, sometimes a few to several on a day. The CP Swing ballroom itself has events just about every day.