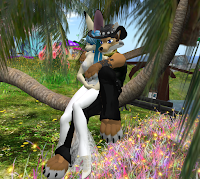 It was a week ago that the Newser announced that RECoyote Mindes was in financial trouble due to his mother coming down with cancer. But over the weekend, her health took a turn for the worst. Last night, he explained the news to me and requested I explain things for him with a statement to the Sunweaver community.

I was just talking with RECoyote Mindes. To begin with, he is VERY grateful for the support you all have shown him, and could not ask for a better group of friends.

Unfortunately, the news from behind his computer is not good. Although his mother's treatments were breaking up the cancer in her lungs, she was declared brain-dead on Sunday and that evening was taken off the respirator. On Monday 10:40AM she passed away.

He wasn't sure how to break the news to everyone, until now. He thanks you for your continued support.

There was a fundraising event on Tuesday to help REC with his expenses that raised 20,000 Lindens, and the kiosk was left there and people are still donating. There is also an ongoing "Tail Sale" with two dozen men and women volunteering, located at the Happy Vixen at the Purrfection Estates (236, 219, 24).

It's a sad time for the Sunweavers as a valued member whom has helped many now finds himself in mourning.