In a surprise move yesterday, Linden Lab announced in a press release that it was postponing the release of the Sansar virtual world until "sometime in 2019." Partially, this is due to a Windows 10 update that rendered the Sansar viewer unplayable, and partially due to difficulties in making Sansar playable on older computers. "We thought these problems would be quickly solved," the statement read, "but our early optimism was disproved and dealing with these problems will take a while.

Linden Lab also announced it was cooperating with two gaming companies, Studio Wildcard and Snail Game, in developing a third virtual world: "Ark Park." Based on the survival game "Ark: Survival Evolved," the virtual world allows users to interact with the dinosaurs without attacking or being attacked. 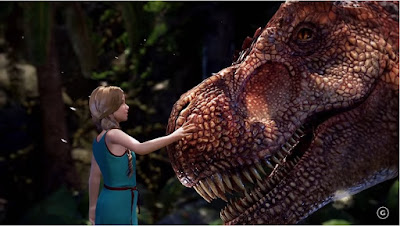 "Dinosaurs have always been popular in computer gaming," the statement from Linden Lab read, "And we are happy to be a part of making a virtual world around them in cooperation with Studio Wildcard and Snail Game."

To see the statement from Linden Lab in it's entirety, Click Here.

Video from Gamespot.
Posted by Bixyl Shuftan at 6:05 AM