Club Cutlass, The Happy Vixen, and Xanadu To Take Part In The Relay For Life Club Crawl 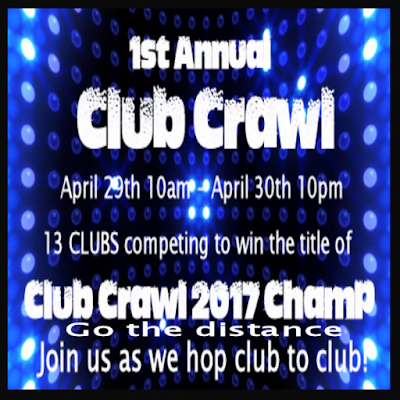 Last week, we announced Relay foe Life team "Go the Distance" was organizing a "Club Crawl." Yesterday, the organizers of the event announced that thirteen clubs were taking part, the event starting 10AM SL time on Saturday, April 29, and would go on to 10PM Sunday April 30.

Multiple clubs and teams are participating in the 1st Annual RFL Club Crawl hosted by Go the Distance. Please support these clubs with your attendance and donations into their kiosk this weekend. Landmarks will be sent this weekend. Questions or want more information contact Cathy10 Longoria or Random Padar.

Unfortunately, we haven't gotten the full schedule for the event, at least not yet. But we can tell you when three of the clubs involved, Club Cutlass, the Happy Vixen, and Xanadu, will be having their events. Instead of tips, DJs will be performing for donations for Team Sunbeamers and Team Go the Distance.

Sunnies;  Club Cutlass, Happy Vixen and Xanadu are all on the list for the first annual Club Crawl.  Cutlass will be running from 2 pm to 10 pm SLT time.  DJ Cynthia, Shocky, Dusk and Snowy, will be providing the tunes.  Since it is an RFL event, The contest can run, but there will be NO TIPPING, all funds are needed for the kiosks and we are splitting them with the organizing team

The Crawl will most likely be stopping by these clubs for only part of the time they're running. But by all means come by and enjoy the music from some talented DJs.
Posted by Bixyl Shuftan at 6:02 AM