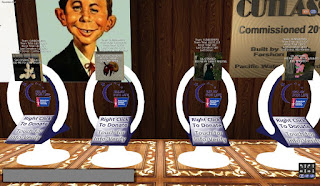 About a couple weeks ago, we reported on ten "Bid Me" events the Relay's Team Sunbeamer is holding. They are Team captain Rita Mariner's offer for others to bid her into her newbie avatar, Brandi Streusel offering others to bid her a mouse cub, Skylark Lefavre offering herself up for a date, Perri Prinz offering to go blue vixen or chocolate bunny, Perri's Xanadu support squad also offering themselves up for date auctions, Nydia Tungsten offering to do a video for the highest bidder, and then there's me taking part in a "Bid Me Tiny" in which I get shrunk down to size for a week for the first 5,000 Lindens, and an additional day for each 2,000 Lindens. 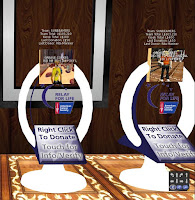 Since then, there have been three additional "Bid Me" events added. Shockwave Yareach is doing a "Bid Me Crabby." For every 3,000 Lindens raised in the "crabby" kiosk, if it beats the "stay" kiosk, the wolf will be spending a week having a "shell" of a time. Gil Otaared, Rita's partner and the owner of a Civil War ironclad in the Sunweaver Estates, is offering to stay a pony avatar for the same 3,000 Lindens a week raised (Rita calls it a "jailbait" avatar as this particular pony character is very young). And Newser writer Grease Coakes is offering to put aside his fox avatar in favor of a ringtail for one week for every 5,000 Lindens raised.

Rita told the Newser the kiosks will be up for one more week. At 8PM Wednesday April 19, the totals will be final, and the results announced.