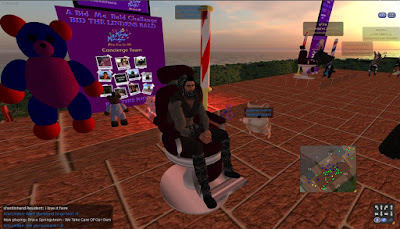 What has clearly been the most successful Relay for Life "Bid Me" event in Second Life history came to it's conclusion at 2PM SL time yesterday at Wednesday April 20 in the Relay dAlliez sim. Twenty eight Lindens in three teams put their hair on the line for the cause of raising money for the American Cancer Society. Bidding was slow at first. But in the final days the cash was pouring in. And the results of the three teams are:

The Lindens whom will be losing their hair, for a time period of close to a year, are:

The money raised is counted as a part of the Relay Rockers team, which originated the "Bid Me Bald" events, and has the noted Relayer Trader Whiplash of T1 Radio as part of their members.

Congratulations to all involved.