Press Release: The Halfway There Fair, May 5 - 7

RELAY FOR LIFE OF SECOND LIFE REACHES THE HALFWAY POINT!

Relay For Life of Second Life Relayers invite your to celebrate with them as the Relay season reaches its halfway point.


The SLURL for the event: http://maps.secondlife.com/secondlife/American%20Cancer%20Society/125/82/21 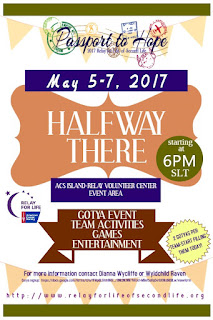 Starting at 6 p.m. SLT on Friday, May 5, a Small Town Festival will be held on ACS Island and continue through the evening of Sunday, May 7. Come play with the team-hosted games, participate in a Gotya event, enjoy entertainment and awards ceremonies and much more.


“Halfway There celebrates the achievements of our Relayers so far this year and shouldn’t be missed,” said event Chair Nuala Maracas. “Our teams and sponsors have been pouring their hearts into the season to help our American Cancer Society defeat cancer.”


The second half of the Relay season looks to shape up to be unforgettable with exciting and fun events scheduled between now and Relay Weekend on July 15 & 16.


About Relay For Life of Second Life


Relay For Life is the signature event of the American Cancer Society and has been active, and continually growing in Second Life for 13 years. In 2005, the first Relay For Life of Second Life (RFL of SL) was attended by a few hundred avatars and raised almost $5,000 US dollars for the American Cancer Society. As of July 2014 RFL of SL ranked number 17th in donations received among more than 5,600 relay events held worldwide. As of January, 2017 RFL of SL celebrated raising 3 million US dollars to support the mission of the Society to 'Save Lives, Celebrate Lives and Lead The Fight for A World Without Cancer!


About the American Cancer Society


For more than 100 years, the American Cancer Society has been working to create a world with less cancer and more birthdays and is the world leader in the fight to end cancer. Together with our global partners and millions of supporters, the American Cancer Society carries out its mission to Save Lives, Celebrate Lives, and Lead the Fight for a World Without Cancer.


www.cancer.org/involved/participate/relayforlife/second-life
Posted by Bixyl Shuftan at 6:01 AM