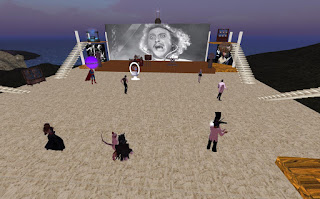 Work on the Steelhead Community's home of Steelhead Bay continues. Besides Club Gearz, they now have a new place to dance, their new theater. On Friday April 21, it had it's first event in the form of a "Mad Scientists' Ball," with Fuzzball Ortega playing the music.

Shortly afterwards, Fuzzball gave a brief announcement for the community, saying that Loki Eliot was helping him with building and touching up the streets, "Bear with us as we get that situated." They were also adding street lamps to help light up the place at night. But there was one other issue at hand. 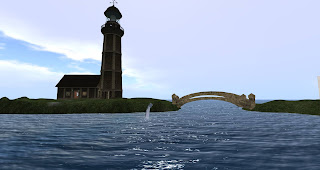 "Something may or may not be living in the bay," Fuzzball stated, "Apparently, folks have been seeing something surface every three minutes or so." He would later post the picture to the left on Facebook, "I think it's some old log floating in the bay......"


So is it "Swamp Gas" as someone suggested. Or does Steelhead have it's own sea monster? Perhaps time will tell. Or perhaps the "old log" will float away to other shores.