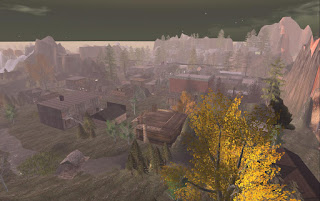 Since January, the Newser has been looking at the Wild West Roleplay. The region is a twenty-three sim area of varying terrains from desert to forest to mountain, but all are in the theme of the American Old West  Our first article was about getting started and making some cash. The second was about the Native American/Indian tribes. But while dealing with the Indians could be a little complex for the cowboys and settlers, there was no doubt about where they stood with another classic character of a Western story: the outlaw. Called by other names such as bandit and badman, he was out to rob you plain and simple. 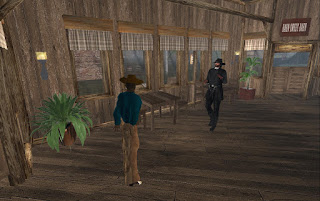 In the Wild West Roleplay, there are some outlaw players. Some are in gangs. Others are usually alone, though may temporarily team up. One I ran into at a saloon was Spin (Spin Stooge). He had first heard about the Wild West Roleplay "'bout three 'n a half years ago. (I) started out in Tombstone (another western roleplay area), I was a lawman of some sorts as an Arizona ranger, then some outlaws from there asked me to come here and be a outlaw with them. So I did and been here ever since." Asking him about his character, he told me, "Well, I decided to be a preacher outlaw, using being a preacher as a front, my character is a conman and wears mask and robs banks. Being a traveling preacher, I can rob banks in every territory." The preacher act was purely just that, an act, "to earn peoples trust before I rob them, or their town I should say."

Spin knew another outlaw whom went about openly while planning robberies in secret, "We have another outlaw. Believe it or not he is a dress maker, and that's his front. He also starts a lot of conspiracy, he will use false documents and post it on mines and such claiming the mine belongs to him. He and I pull off a lot of bank jobs together. When there's a job that takes more then one person to do we team up (A) little of that. (A) little of conning people like selling them property to homestead that someone else already owns. I even tried selling a burning house once that belonged to the district attorney here in Bear River. ... we do 'bout anything to make coins. Then you have just the average scum of outlaws and gangs that ride in as a group and rob banks then return to their hideouts." 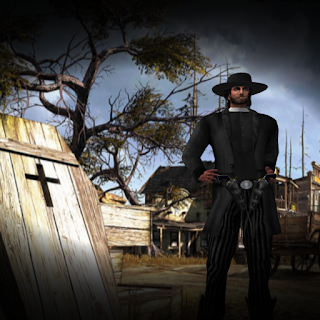 When I asked him about any close calls, Spin answered, "Oh I always get found out one way or another there is a witness, that's what makes the RP fun, and adds to it so others can roleplay, because then courts involved and judges, attorneys, and juries. (I) think when I first started here, I was fairy new to RP, and I shot a Federal judge. He wanted to kill his character off, so he decided to die. Then I had a posse of a marshal and five deputies come after me.We had a good shoot out. I got a couple of them, but at the end they shot me down, then healed me up in jail and was going to hang me. Then my old gang back then came and busted me out of jail before they could hang me. (I) think that was one the funnest." I asked what was the funny part. Spin answered, "Oh, I guess the fact they let the marshal and new judge almost hang me before they reacted to free me. They made me sweat it out a bit. (It) was one them last minute rescues. Was funny to them, but not funny at my end."

On another occasion, "I even had talked an Indian maiden into sneaking me a gun threw the jail house bars. She was sweet on me, and I asked her to get me a gun and she did." Other than these, he had never been caught, though there had been close calls, "Marshals and deputies and sheriffs had tried. But except for that one time they have never brought me in unless I let them so they could RP court for a minor charge. Like the time I was cleaning my gun and it discharged, and shot a fancy lady that just got off the stage for a lay over. But they decided it was a accident in court and charges was dismissed. Lady wasn't happy bout it , but so be it."

I asked if his character ever tried to justify his robberies, or just flat out admitted he was a bandit, Spin answered, "Oh when I steal from banks it's justified. I tell folks im just collecting donations from the bank to build a church. That basically that the Wells Fargo money bags on my saddle wasn't stoled they was donated. Just a little fib you know."

Spin concluded, "(I) just hope lot folks read your paper and can see the fun and humor in RPing on a Western sim. It's not always serious. We have lot fun, and hope more people will want come and try it out , and fill up these sims so we can have a lot more roleplay." 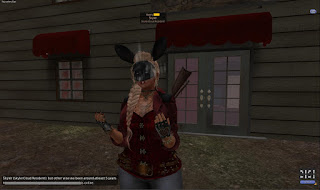 Earlier on, Goneigh, the equine owner of Titingham took me to see the "Whiskey Riders," a bandit gang. The one we talked to was Škÿlér (skylercloud), a woman in the gang whom appeared to us in a bunny mask, in front of the gang's hangout. "We mess around RP-ing capturing people and setting things on fire," she told us, saying the group had been around for five years, "I've been off and on here around five years too, and my friends are what keep me around. I love 'em, they family." When asked if while roleplaying she made friends and associates, she agreed, "and enemies (laughter). Rival gangs. We capture and steal from 'em." Leilyna Delvor (Leilyna Resident), whom overheard us from the building, added, "We also rob banks." "Looooots of money." Skyler told us.

I asked Skyler about her mask. She answered, "It's my gang mask, so (the) law can't tell who I am. But I also go by 'Bunny.'" Goneigh remarked he heard a story, "I think she had the name of her last boyfriend tattooed across her forehead. But after she killed him for cheating, she wears a mask to cover his name and her shame." Skyler burst out laughing, complementing the equine on his imagination, then saying "Well I'm adorable and so are bunnies." 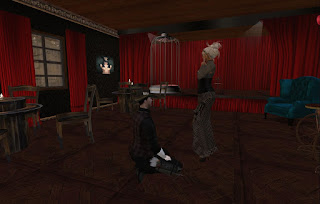 As we were talking, the other two bandits inside the building, Harley Buu (HastaLaVista555 Resident) and Twist (sweetsiner99 Resident), had been talking. Suddenly Harley got down on one knee in front of the lady, "Twist, you are the most amazng woman I've ever met., and I want you badly. So....will you make me the happiest man alive and be my wife?" The woman was surprised, stammering a little in her answer, "Ummm, will you be faithful to me, catch me dinner, take care for my girls?" Harley answered, "Of course. You're all the woman I need." She then answered "Yes." Harley went, "Oh my God, I'm so happy." So there was more to being an outlaw than stealing cash, but also sometimes stealing hearts.

That's it for now about the Wild West Roleplay. Until next time, happy trails.