Update On The Rusty Garter Saloon 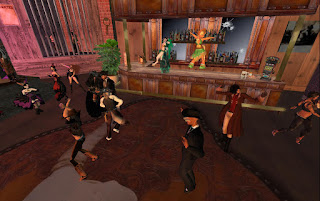 A few months ago, we wrote about the "Rusty Garter Saloon," a cowboy-themed venue in the Caledon II sim. Recently, there has been a change in ownership. Blake (Palmerblake), the owner of the saloon, along with the location's Patty Poppy (Autopilotpatty Poppy), will no longer be operating the establishment. The last event under their direction was on Friday April 14. But fans of the saloon need not worry. One of the people coming by to enjoy the place, Soaron Ronin (soaron.fazuku), stepped up to continue to run it. 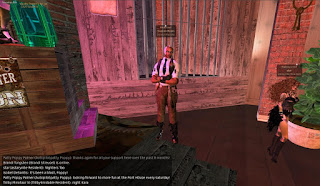 Chatting with Soaron some, he explained that the transfer had been done, "ll is sorted.. just small details." He had no plans to change anything, "The saloon remains as is.. just a new owner that likes to keep the place running." He would need to find a DJ, but he expected that wouldn't take long. I asked him if he had any role at the saloon before. His answer was, "Wanderer, as most of my SL life." So would it be a problem for him to have to take care of a fixed location? He told me no, "Well I got time, so not a problem." He told me that visitors to the saloon should expect to see him act in-character, "I keep the OOC (talk) to a bare minimu."

The "Rusty Garter Saloon" has events "every other Friday" at 7PM SL time.