News and Commentary: Second Life Revenue Reportedly Down By Half In Eight Years, Number of Sims Drops Below 24K 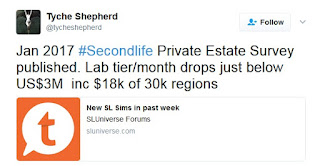 Some troubling news was posted on the SL Universe forums by Tyche Shepard, and passed on by Hamlet Au. In Tyche's private estate survey in January, she estimated that the revenue Linden Lab makes from Second Life sim tiers had dropped to just under three million US dollars a year, or 36 million a year. Hamlet Au when seeing this information calculated that as the Lab makes about 80% of it's money from Second Life through tier payments, the rest through premium accounts, Linden dollar purchases, and fees, their total income from the virtual world was about 50 million US dollars. 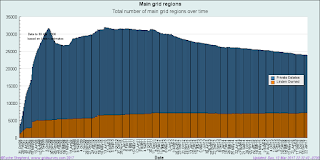 While that is a lot of money, consider that in 2009 Linden Lab's income was estimated to be about 100 million dollars. This represents a drop in income of fifty percent. The Lab is making only half now what they were eight years ago.

This drop in revenue can easily be seen as an explanation for certain actions Linden Lab has taken over the past year and a half, such as reducing the set-up fees for getting sims, lowering sim tiers for a time (in exchange for a fee), and increasing the prim capacity for sims. It's also a partial explanation for why Linden Lab is making a gamble with Sansar. They're not making the money they used to. 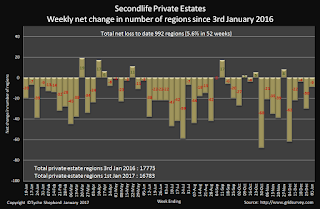 But according to Tyche's statistics from January 2, despite the moves Linden Lab has made, the overall slow decline of the number of sims in Second Life continued throughout 2016. In the first quarter of 2017, the total number of sims dropped below 24,000. Linden Lab may very well conclude Sansar is their sole chance for stopping their revenue slide. Hamlet's earlier observation that Sansar was starting to remind him more and more of the old Blue Mars virtual world, which after less than two years was pretty much on it's way out, is not exactly an encouraging sign.

While Sansar may not be "do or die" for Linden Lab as Hamlet also suggested, it's failure would be a huge blow as it would mean a significant investment in resources would get no return, and limit the Lab's options. In the short term, it might mean more tier reductions and more advantages for premium account members as Linden Lab takes more steps to try to stop the decline. In the long term if the decline continues, the Lab may decide to let some of it's members go in a "restructuring," reduce customer service, and other steps to reduce their overhead. And if that doesn't work, well, that may be best left unmentioned.