For close to a month, Team Sunbeamers has had a number of "Bid Me" events going. Numbering ten at first, including one that was actually an auction, the number of the fundraisers was soon raised to thirteen. Finally on Friday, April 21, at 8PM, the kiosks for the events were frozen, and the amounts calculated. Team captain made an announcement of the results the following day, in the cases of events involving more than one kiosk only the amount of the winning one announced. 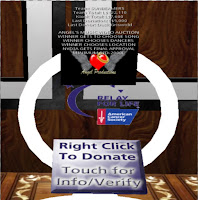 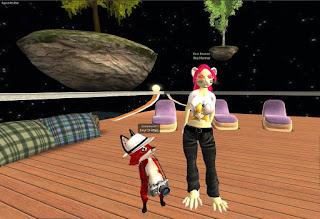 Of the video auction, Dusk Griswold gets to chose the theme of Nydia Tungsten's next video, as well as the dancers or actors. Some, including Rita and myself, are stuck in new avatars for a week. Though as yours truly does some work on journalism, on some occasions such as when doing interviews I'll be temporarily back in my usual avatar.

The Sunbeamer team has been described as "creeping towards Silver." In the past three weeks, the team has raised about twenty thousand Linden dollars, the team total as of when this article was written adding up to 122,700 Lindens (Totals page). .This upcoming weekend, Club Cutlass and the Happy Vixen, two clubs of the Sunweaver and Angel communities, of which most of the members of Team Sunbeamers make their home, will be a part of the Club Crawl. Future planned events include an air show, a road rally, a tribute party for the late Artistic Fimicloud, and others.