The Petrovsky Flux Is Gone


In 2013, the Newser reported on an LEA exhibit called the Bogon Flux, described as, "a scrap-metal steampunk structure that defies gravity." Enterable from the bottom, the structure was a series of hollow metalic-looking tubes that connected to junctions that led to other tubes, windows, and occasionally a fishtank or metallic hand. The structure was not static, but would slowly build itself up to resembling a huge metallic tree, and every so often would collapse and the process of building would start all over again. 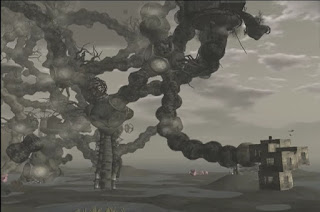 Created by Blotto Epsilon, later he and Cutea Benelli would create an even greater build: the Petrovsky Flux. "There are five independent structures that grow among each other, each with different boundaries." He would tell Hamlet Au in a New World Notes article, "the highest goes up to about 350 meters, I think." The build was hosted by the Spencer Art Museum sim, which is owned by the gallery of the same name in the real life University of Kansas.

But unfortunately, the build is no longer up. It seems after years of funding the sim, the University made the decision to stop paying for it, and eventually the sim faded away. Cutea Benelli made the announcement on Facebook, "After five years the Spencer Museum of Art could no longer host the Petrovsky Flux, alas. We were arrears in paying tier and the plug was yanked."

A sad development for interactive art lovers. Perhaps the structure will find a new home, or Linden Lab would be willing to host it. until then, it can be seen only in pictures or videos such as the one made by the Spencer Art Museum itself, or a particularly good one by Toxic Menges.