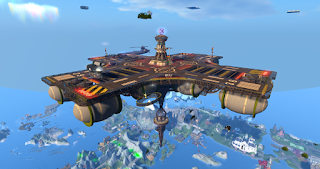 Some sad news from the state of Caledon. The Middlesea sim is fading away, and the Iron Cloud along with it. As of the writing of this article, the sim appears on the map, but cannot be seen from outside or can be entered. Wrath Constantine, the owner of the sim and airport, had the following announcement for the Crimson Pirates, whom had the place as their base of operations.

Due to RL troubles, I'm forced to shut down the Iron Cloud. This isn't the end of the CP, but it is the end of Middlesea. The Iron Cloud has been aloft for nearly a decade, and some day I hope to bring it back. But for now, I need to fix RL before I can do anything of note in SL. Until we meet again, voyage gloriously my pirates.

The Second Life Aviation Wiki describes the Iron Cloud as "single largest aviation facility" in the Caledon sim group. Besides the Crimson Pirates, the airbase was the home of the "Constantine Air Werkz," a local business of the steampunk-themed area. With news of the sim's closing, air routes in the region were changed.