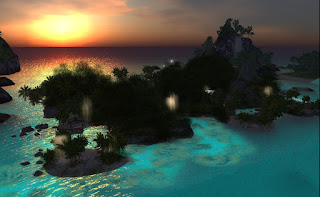 I was recently at an island getaway vacation spot in Second Life, the AiR Club and Resort. Created and owned by Roxanne (Hiddeyn Resident), she invited me over to have a look. Dropping over, the place's default time had been set to dawn, resulting in a picturesque sunrise to the east. "I honestly wanted to create somewhere really peaceful that felt like a vacation," Roxanne told me, " I really wanted to create a place similar to my real-life vacations." She told me the location of the real-life location the sim was based on was in the Seychelles Islands hundreds of miles off the eastern coast of Africa in the Indian Ocean. "And (I) was sick of skybox clubs," she added, "not enough places with fresh pixel 'AiR,'" hence the sim's name. At the entry location, I noticed meteors streaking across the still dark sky. "They were here from Christmas," Roxanne told me with a smile, " and I decided to keep them. And also the twinkly lights. I'm a big fan of twinkly lights." 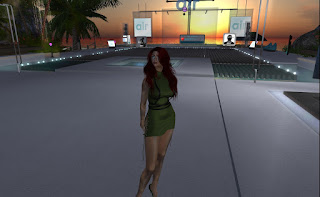 The place was fairly quiet at the time, "You've caught us on a Saturday where we don't have an event. Not usual, but we had so many people off sick and on vacation, we decided to have a quiet Saturday." She offered to show me around.

We first went to an open-air club. "This is the AiR Chill lounge ," Roxanne told me, "It's parcelled off from the main club - we have small accoustic sets and poetry readings here. Also people chill by the pool and play greedy, sometimes Dj's will do ad hoc sets, etc. We have various areas around the sim for people to hang out - I really want to encourage people to think of it as their second home, or at least their Second Life vacation home. Im certainly not in this for the money (laughter). ... That part is slower than I would like. I have spent the last few months getting the live music side running and its very successful. We had 92 here here the other night. ... most of the artists and DJ's love the open aspect." 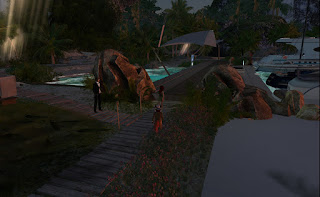 It was about then that AiR's co-owner Spence Corwin appeared. Roxanne told me, "Spence has joined me at AiR recently - hes very experienced and has brought a great energy." When I asked how long AiR had been running, Roxanne told me, "We celebrate our six month  'anniversary' on 29th January.  That's a lifetime in SL for venues, well feels like it (smile). ... It took a while, and on my old avatar I had some experience - slow and steady wins the race."

We began walking around further, Roxanne fast on her feet ahead of me and Spence, "Sorry ... I need to find a slower AO." We soon approached a small harbor with a large yacht, which she quickly put away, "Sorry. just realized I had left a big boat. We have a marina for guests to party on the boats - the water isn't sailable (smile). We are going to have our sixth month party on the yacht - I just need to place it better (smile)." Before long, the man would have to log off. "Spence is also unwell," Roxanne told me, "he came online to say hi." 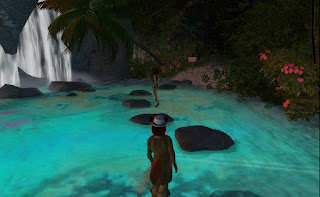 We walked around down a path in the rain forest, "The place has lots of little vistas and hang out areas. The club is a small part." We soon came across a bridge over a stream, which was hanging so low, the middle part went under the surface of the water. "That water is splashable," Roxanne told me, and walked across it herself to demonstrate, "It's embarrassing how much time I walk over that bridge (smile). Easily amused I am."

One of the more memorable events in the island's history took place in late October, "At Halloween we were visited by ten pirate ships. All ghostly of course. Well, they took a few souls, but it didn't hurt traffic too much (grins)." When I asked if the place had a shoe shop or fish market for the occasion, she giggled in response. She would later say in December, "At Christmas we had sandmen, instead of snowmen, who gave out random gifts." There was also an elven-themed wedding here. 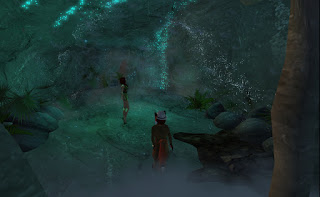 We continued on. Roxanne told me of the island, "it's been designed in that hopefully you will find a new place each time you visit." Eventually, the path took us to a large pond with some sandy shore and rocky cliff and jungle around it. There were stepping stones allowing people to walk across it, and a waterfall going down one cliff. "This is one of my favorite parts of the island," Roxanne told me, "with the exception of the sunsets." She told me she planned to add to the underwater, "this area will eventually have mermaid/man items underwater, a few bits under the water here and also in the marina area. For now - we have to stick to the stones." She headed to the waterfall, going inside, and following her there was a hidden cavern inside, "Another cuddle area and I just love this cave (smile)." 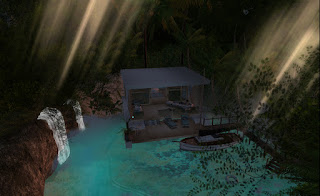 Besides the cuddle spots, couples could also enjoy the rental cottages, "We have four vacation rentals here, designed for only one to two nights, max seven. (They've) been really popular for those getting married in SL or proposals." She showed me one after turning off it's security system, which was to help ensure the privacy of any renters, "We have four, all slightly different. ...  I think more people in SL should take vacations (smile)." She did say there were gift certificates for rentals to give out as presents for friends. 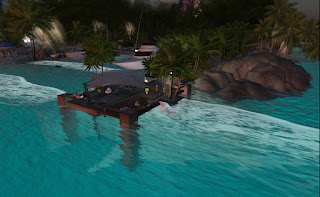 We ended the tour at a pier area, in the southeast corner of the island, "this is where you'll usually find me at sunset, and where a lot of people come to chill out. (There is a) few more games and cuddle places down the way as well. ... I missed out the forest and some bits that also have cuddle areas, but thought I'd not bombard you with places." She had made sure there was plenty of places to see on the sim, "It's just one island but I've not tired of it yet."

Roxanne went onto say that the place had a policy of welcoming all types of avatars, saying one of the regulars was a full-sized dragon avatar, and she herself has a microfox. For those in the VIP group, "we try and give a different VIP gift every few months." One example of one was a chair made to look like half a boat. She told me there are currently about 350 in the group.