Press Release: Join Us for One Billion Rising in Second Life 2018!


For the fifth year, on February 14, 2018, men and women in Second Life will join activists, writers, thinkers, celebrities, and people across the world to Rise, Resist and Unite as a show of unity, individual strength, and the need for change.

One Billion Rising first began in 2013 with the fierce struggle against sexual and physical violence – taking on the advocacy against rape, battery, incest, female genital mutilation and sex trafficking that V-Day campaigns over 18 years have been at the forefront of. Over the last five years, as One Billion Rising has grown and the local campaigns deepened, it has also brought in economic violence and the violence of poverty, racial violence, gender violence, violence caused by corruption, occupation and aggression, violence caused by environmental disasters, climate change and environmental plunder, violence impacting women in the context of state sponsored wars, militarization, and the worsening internal and international displacement of millions of people, and violence created by corporate greed, among so many others. 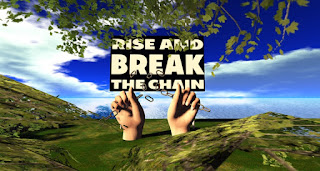 This year, One Billion Rising Revolution is giving sharper focus and visibility to the exploitation of women, and to harnessing even stronger global solidarity to demand an end to violence in all forms.
The Second Life event will feature a four-region stage where 200 people can come together to dance, surrounded by an area of art installations, an arena for poetry and dramatic productions, and informational exhibits. A variety of performers will play over the 24-hour period and poetry and dramatic events will be held at different times, enabling people all over the world to attend this virtual event no matter their timezone. The regions will have a General maturity rating to allow all residents an opportunity to participate. Pictures are welcome on the event’s Flickr group.

If you would like to volunteer to support the event, go here to find out how you can join in.

If you would like to report on the event as a member of the press, go here.

The objective of the event is to raise awareness, not to raise funds; however, information about real-world organisations will be available for those wishing to donate.

We will be announcing the sponsors for One Billion Rising shortly. If you are interested in becoming a sponsor, go here (please note, as we are not a fundraising event, we have a limited number of sponsorship spaces to cover costs of the 4 regions used for the 24 hours of music, dance, poetry, literature, art installations and shows).