It's fair to say most online gamers have heard of "Swatting." For those who haven't, this is when someone calls a police department and makes a phony claim of a serious crime, such as a hostage situation, at someone else's address. While hoax calls to the cops are nothing new, they've become more of a concern in recent years with angry video and computer gamers tracing down the address of a rival and calling the police to claim the person is either about to seriously harm someone or already has, with the intention of terrifying their target and possibly getting them arrested.

Not only is this a waste of taxpayer dollars and the policemen's time, and possibly diverting them from any real crimes at the moment, but there's the potential of the police shooting someone. And on Thursday December 28, it happened. Police in Wichita Kansas responded to a caller claiming he was holding people hostage at an address, and ended up shooting and killing a man whom had been doing nothing wrong. 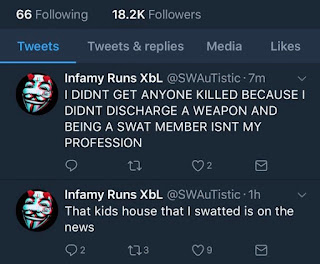 As it turned out, the man wasn't even involved in the dispute that led to the crime. What had happened was two "Call of Duty" game players ended up arguing over a wager of just $1.50, and one whose Twitter handle happened to be "@SWAuTistic" made a call at the 911 center in the town of what he thought was his rival's address. But he had been given the wrong one. The caller claimed to have shot his father and holding the rest of the family hostage, and had poured gasoline around the house. The address police were given was that of Andrew Thomas Finch. Police shot Finch at his front door when his hand moved to his waist, and the unarmed man was killed. Finch was 28, and is survived by three children. The man's family has stated he wasn't a game player. 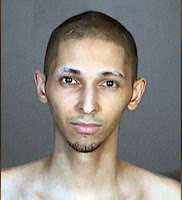 As news of the shooting spread, "@SWAuTistic" changed his Twitter address. But other gamers took pictures of and shared a tweet of his insisting he was blameless for what happened, "I DIDNT GET ANYONE KILLED BECAUSE I DIDNT DISCHARGE A WEAPON AND BEING A SWAT MEMBER ISNT MY PROFESSION". The call and tweets were traced to Tyler Barris, 25, of Los Angeles, whom was arrested. Barris has been in trouble before, charged and convited of making bomb threats to a TV station.

While there are no Federal laws about swatting, Barris faces a number of charges. On state level, he could be charged with reckless homicide, plus California has a law against swatting punishable by a year in prison and a $10,000 fine.

Posted by Bixyl Shuftan at 2:45 PM