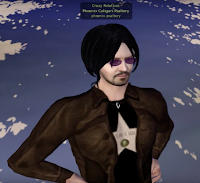 Yesterday, Hamlet Au reported in New World Notes that Phoenix Psaltery, a longtime resident of Second Life, had passed away. While the exact cause of death was not given, he had been admitted to the hospital last week suffering from high blood pressure and an infection. He was 58.

Phoenix, known as Alan Seeger in real life, was a writer and a musician. Among the things he was known for was being the co-founder of the Metaverse Messenger, an inworld newspaper reporting on the news of Second Life, which began in August 2005. Phoenix would step down in 2008, and the paper's readership began to decline, folding in mid 2009.