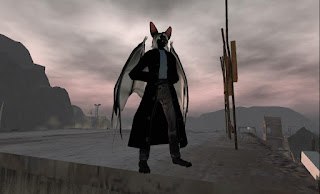 As a post-apocalyptic wasteland slowly recovering from the collapse of civilization, the Deathlands have seen a number of scary beings and scary tales of such over time. But this October, something new has appeared, or at least that's what some claim. Lately there have been a number of sightings and tales of a human-sized vampire bat.

In a place where mutant monsters and raiders are threats, a vampire might not seem quite so scary. And indeed with a few of the sightings, the bat is described as helpful. In one case, a band traveling at night found themselves under attack by raiders when they saw a shape of some kind from above dropping an object. Then a magnesium flare lit up in the middle of the attacking raiders. Blinded, they could only stumble while the travelers got away. When they returned in the day to recover some lost items, they found the bodies of a few of the raiders, drained of blood.

In another case, a tavern owner late at night had a knock at the door, and answering found only a crudely written note, saying someone was hurt near the intersection of two nearby roads. Concerned, he and a few others in town went over, and found the bodies of two mutants, drained of blood, and an injured man with a crudely-made neck brace. When the man recovered, he claimed the mutants had broken his neck, then were attacked by some dark shape before he passed out. When they got the man to a doctor to examine his neck, the physician wondered if whomever had set it had access to x-rays, or sonar.

Not all of the stories involve tales of rescue. One was from someone whom checking on his sister found she needed supplies, notably food. When he returned, he found someone else had delivered a few fruits and meat of some kind. Curiously, she had what looked like two half-healed puncture marks on her neck. When he asked who was here, where the food came from, and how did she get the marks, she just smiled whistfully.

The Baron, Rebel Wolf, could neither confirm of deny the existence of the vampire bat, saying stranger mutations have happened. But even in the Deathlands, people tend to tell tall tales around Halloween.

Note: the preceeding was a tale of fiction for this time of year.