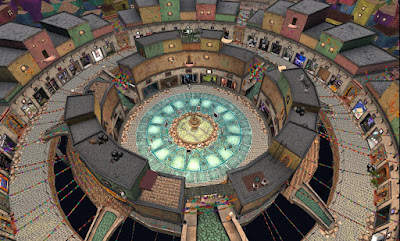 The Gacha Guild, a twice a year shopping event, is back in Second Life. This is the first season since Linden Lab banned the sale of items through gacha machines and vendors last month. While the organizers decided they would continue, renaming themselves "The Guild," they're having to sell items though regular methods. So the gachas are gone, and there are no random chances when buying an item. Some items are sold individually. Others through fatpacks. A casual look around showed prices are higher than last season.

The theme this year is "Dia de Muertos," the area looking like a Latin American town.  One thing that will be the same is the "Halftime Hunt." It will start Friday October 15, and players will have a chance to get some prizes. It's unknown how much of an effect the gacha ban will have on attendance numbers.