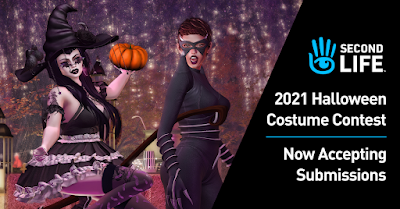 On the official blog, Linden Lab announced a Halloween costume contest. To encourage more people to enter, they're offering a 25,000 Linden dollar prize. The catch, the deadline for submissions is a few days before Halloween, and the rules leave out some costumes.

Unleash the costume of your dreams for a chance to win L$25K!

The Official Second Life Halloween Costume Contest is open for submissions from now until Thursday, October 28th at 8AM PDT.

Costumes will be judged on creativity and originality. Show us a look that will turn heads (180°, preferably)!

Need some spooky inspo? Check out:

The Haunted category of the Destination Guide
Our official Flickr pool to scope out the competition
The Halloween Shop and Hop, with almost 300 vendors offering free gifts, discounts and bone-chilling clothes and accessories

The winner will be announced next Friday, so go on witch your bad self!

As stated, you have only until 8AM on Thursday October 28 to enter. There can only be one entry per resident (or at least email address). The rules on eligible costumes include that they can't be too suggestive or "unnecessarily violent," be of celebrities living or dead, be of a political nature, "promote" alcohol or tobacco or firearms, "communicates messages or images inconsistent with the positive images and good will to which we wish to associate," etc.