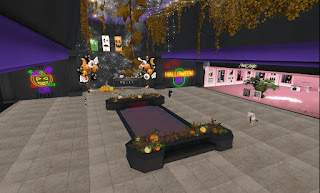 It's still early in October, but there are plenty of Halloween-related things to do in Second Life. For those who like shopping most of all, there's the "Shop and Hop" going on, with ten sims of stores to see and buy from.

Come celebrate Halloween with your favorite Second Life Creators. With sales galore and gifts for everyone! The event will run from October 1st to 31st, 2021.

The Destinations Guide had a list of the sims. On the Linden blog, the post about the shopping event had a list of participating sellers with a SLURL next to each one. Or you can just head here: Tinseled (154/128/52) 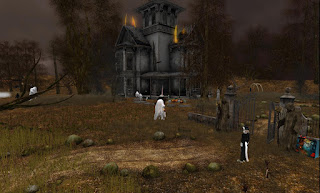 There's also some haunted areas to visit. One featured in Second Life Destinations was "Hauntings."

Moody, ghostly, creepy, and fun, Hauntings is another delightful venue in Old Town. Once a charming and peaceful spot in rural America, when the events began happening, folks moved away. No cars stopped at the motel; the farm lies abandoned. What happened here? What went on in that house? No-one knows. But once a year, the spirits of those who were innocent walk, looking for treats.

To get to this spooky place, head over to Adagio Breeze (199/59/3603). The place is a little scary, though not as nerve wracking as some places. Oh, and don't worry about the giant bat, too much. 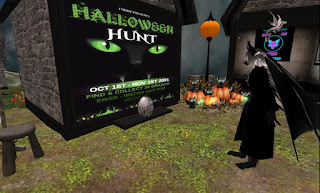 For those in the mood for a hunt to get lots of prizes, one place to go is the Furry Fashion Halloween area. They have one every year. This year, one looks around a foggy fantasy-themed place, with a few signs of witches and pirates, for dragon eggs. There are thirty to be found, as well as a few decoys that give nothing. Flying is turned off, but all places can be reached by jumping, "think jump puzzles from Guild Wars2 (Blame Fortunas and Minty for that!)."

It is recommended that you set your environment to foggy or Midnight, and people are asked not to give hints to others. The entrance, which has some backstory, is at Furry (83/115/4007).

Oh, and Furry Fashion has a Halloween photo contest. All pictures have to be taken in the Halloween area, "Submissions must be put in notecard form into the contest application box by the ghost ship in the Halloween area - Photos must be full perm or linked to your twitter/flickr. Don't forget to add your legacy SL name so we know who you are!" You can send up to five pictures, and the contest lasts until November 3. First prize is 5000 Lindens, with 2500L for second, and 1000L for third.

Stay tuned for more reports of Halloween locations and events.