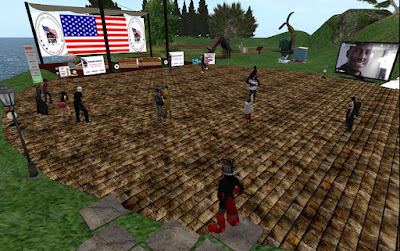 On Sunday October 24, Veterans Isle held it's monthly fundraiser concert. Organized in part by Frets Nirvana, the event raises money for the Homes For Our Troops charity. The event ran from 4PM to 9PM SL time (Midnight EST).

The concert started out with Waya Snowpaw at 4PM, acting as DJ, dressed in uniform. After him were several live performers.


Tonight is the night folks!  October’s Homes for Our Troops benefit with a great lineup.  Up next is Wolfie Moonshadow ….kicking out the jams!  Check it out:

For the five hour event, the various musicians played or sang on stage. As they performed, the crowd donated money to the two house-shaped kiosks on either side of the stage. At the end of Ricky's set, a total of 95,894 Linden dollars had been raised. But someone donated enough to make the total an even 100,000 Lindens.

The monthly event is sponsored by Frets Nirvana and the U.S. Military Veteran’s Group of Second Life. Homes Four Our Troops helps provide, and remodel, homes for wounded veterans https://www.hfotusa.org.

Posted by Bixyl Shuftan at 2:01 PM