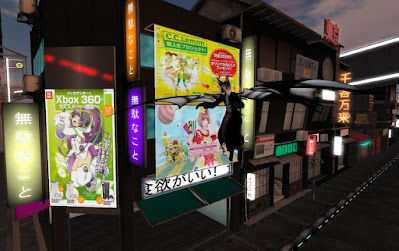 Montecito Bay has seen some strange things in it's past from flying saucers to slime monsters. This Halloween season, something odd has been spotted flying around at night, a human-sized vampire bat.

The bat, which is humanoid with arms and legs along with two huge wings, has been seen several times at night or dusk, either flying through the air or standing on top of a building or in a dark area. About the only time it's been spotted inside a brightly lit building was when it was seen checking out the new arcade.

There are no reports of the bat having harmed anyone, though a few eyewitnesses describe it as chasing away a robber.  There are also reports it's been flirting at a few of the women walking the streets at night. A local clinic has treated a couple women found with two fang marks on their necks and having mild blood loss. When asked how they got the marks, they just smiled.

Talking to leading Montecito Bay citizen Moffett Mephit, he felt there was no reason for alarm as there were no reports of him hurting anyone. In fact, he thought it was cool it was around, commenting at one point he wouldn't mind being one himself, "Skunk teeth are cool, vampire teeth even cooler."

So if you're walking the streets of Montecito Bay at night following a night at Studio 86 or the Roller Rink, or the new video arcade, keep your eyes out for a dark winged shape in the air.

Note: the preceeding was a tale of fiction for this time of year.