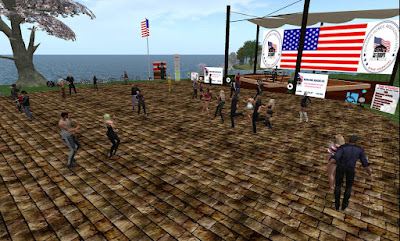 On Sunday September 26, from about 4PM to 9PM SL time, Veterans Isle was the setting for a concert with one DJ followed by four live musicians. The event, organized in part by Frets Nirvana was to raise funds for the Homes For Our Troops charity.

We are kicking off our 2021 Fall series of benefit concerts for Homes for Our Troops tonight.  And we have a great lineup!  Check it out:

Come on out and support those who have sacrificed so much for our freedom.  Help us reach $25,000 in donations to HFOT in 2021!

As DJ Waya Snowpaw and the live singers performed for the crowd on stage, the crowd, which was over thirty at one point, donated money into two house-shaped kiosks on either side of the stage. People were encouraged to donate, and at times someone offered to donate a large amount if others would match it.

At the end of the event, a total of 150,720 Linden dollars had been donated into both kiosks.

These fundraisers are typically held once a month at Veterans Isle, at the last Sunday of the month, with some exceptions such as Thanksgiving weekend.

To read more about Homes For Our Troops, check the website: https://www.hfotusa.org