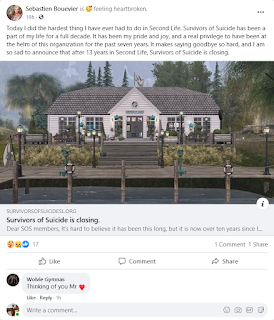 On Saturday October 16 at 2PM, SoS leader Sebastien Bouevier met with others in the group. There, he would first announce that he had reluctantly made the decision to close the group. He would also post the news in the group's blog (https://www.survivorsofsuicidesl.org/post/sos-is-closing), and on Facebook.

Today I did the hardest thing I have ever had to do in Second Life. Survivors of Suicide has been a part of my life for a full decade. It has been my pride and joy, and a real privilege to have been at the helm of this organization for the past seven years. It makes saying goodbye so hard, and I am so sad to announce that after 13 years in Second Life, Survivors of Suicide is closing.

Sebastien was interviewed in 2017 and 2019 by the Newser. He had first joined the group as someone in need of it's services. Eventually, he would end up taking over the group when it's founder could no longer lead it. Although the group started out for those whom attempted suicide, or whose friends and family had, it eventually expanded to help others suffered from depression (and friends of).

Chatting (with an alt) with some people in the group, a few mentioned on new depression support group: Impact Mental Health. It is led by Kitten Stratten-Jaks (Kitten Meridoc).

The last meeting of Survivors of Suicide is scheduled for Saturday October 23rd at 3PM.