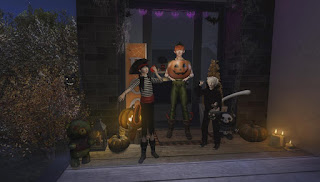 Earlier this week, Patch Linden announced, on a thread in the Linden blog, a Halloween event on the Linden Home continent of Bellisseria, "The Great Trick or Treat Event."


As the event takes place on Bellisseria, only residents who own land there can place a candy bucket. But anyone can get a HUD and collect candy. There's also prizes available in the form of bears. Those whom collect at least one piece of candy get a Skelly Bear (skeleton).

Only residents who own parcels in Bellisseria can host a candy bucket, but all residents can get a game HUD and go Trick or Treating.

Everyone who participates in Trick or Treating and collects at least one candy will receive a Halloween Skelly Bear (skeleton bear is decor only). The top 100 trick or treaters get the Evil Bear (devil) as well. The top 35 players get those two plus the Magic Bear (magcian), which is wearable animesh and "waves a wand with particle effects, sounds." And finally the top ten also get the top prize, the Deady Bear (zombie), an "Animesh Pet/Follower with custom animations, sounds and effects."

To help explain the event, this video of Magellan Linden and Punkey was shown with Magellan going around still incognito.

The event doesn't start until Monday October 18. But residents of Bellisseria can go ahead and get a candy giver and place it on their land. It and the HUD can be found at the following locations.

Good gaming to you.