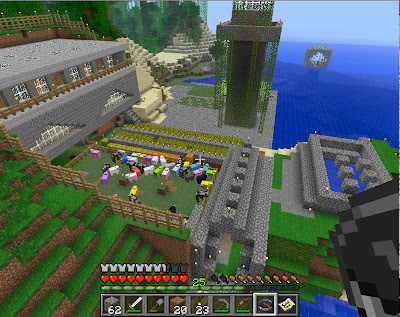 My virtual friends and neighbors are still spending time in Minecraft at the Angels Village server. As time has gone on, the builds have been getting further away, but bigger and better. This place at the western end of the island takes about ten-fifteen minutes to get to from the village. It was creative with it's use of hanging vines, and somehow the sheep got colored. Wool can be dyed in the game, but I didn't read about doing that before sheering it from the critters. 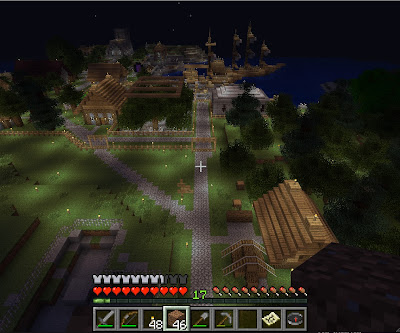 "Shiriville" is so far southeast of Angels' Village, it goes off my map centered there. It took over a Minecraft day to get there. The owner of the place spent quite some time on the details. These three-masted ships for instance, it took some creative use of logs, fence posts, planks, ladders, and for the sails wool. Other builds include a dam with water outflowing. 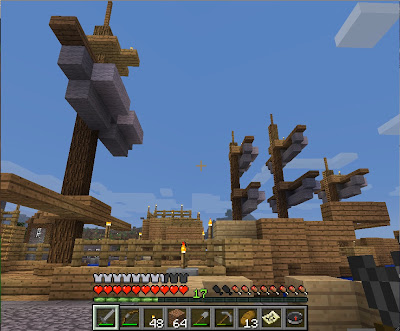 Other locations are less spectacular visually, but notable in other ways. RECoyote Mindes' "Coyote's Den" south of the village is dug into and under a hill, with features such as underground wheat, cattle, and chicken farms. Skylark LeFarve went way, way north, the road to her place crossing the  expanse of desert , the water north of the island, another expanse of desert, and through some tundra before coming to a mountain. It's a safe bet it takes thirty minutes to walk there from Angels on foot.

And yours truly? So far just a few small shelters while exploring around, plus a cabin a few minutes away east of Angels Village. It's most notable feature? It's connected to my room in the village via a tunnel, so trips back and forth are monster free (and dry during rain). Maybe something else will be built soon.