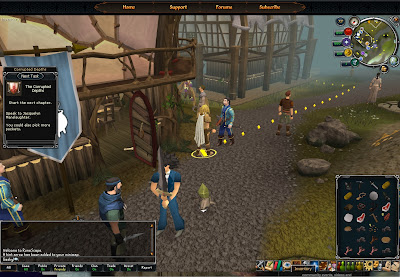 Before playing World of Warcraft and Second Life, I had been a player in Runescape. Probably the most popular of the MMOs, it's gone a long way since the days when only a few thousand were on at once when I gave it a try in 2003. Currently, it boasts 10 million active accounts. It's been called a "freemium" or "velvet rope" game as you need to pay a subscription to get the full membership, which gets you access to more than half the map, more bank space, being able to use certain items, more quests, etc. Someone called the free version a good starting MMO for anyone new to this genere of games.

Recently, I got a notice in the mail about free two week trial periods for full memberships available. So a little curious about the game I used to spend so much time in, I signed up and went back in. Going about, I noticed after about five years, quite a bit was still the same, and a few things had changed. For one, the world now had a name: Gielinor. Before then, it had simply been called "Runescape" like the game.

One place I went to was probably a good one for those who hadn't played for a while (like me) was Burthorpe, just west of the area where free players are limited to. There, a number of miniquests reintroduced me to the skills, as well as introducing me to a new one: Summoning (the other introduced since I was away was Dungeoneering). There was also the baby troll pet I got from one of the smaller quests.

The two week free memberships are available until September 7th. For anyone interested, head to http://www.runescape.com/. For help, two hint sites I'd found useful in the past are Rune HQ and Tip.it.

*Addition* Oh, the thieving training quest in Taverly, south of Burthorpe, take it, it's hilarious.

Posted by Bixyl Shuftan at 1:00 PM