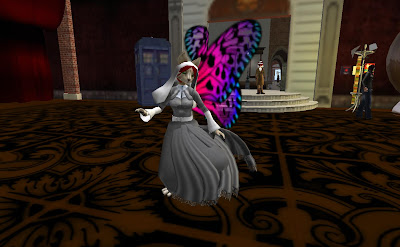 On Friday night, August 31st at 7PM, there was an event at the Steelhead ballroom that was special in two ways. One, in honor of the new season of "Dr. Who," the dance had the theme of the noted time traveler's show, with some dressed up in various outfits of The Doctor, or other characters on the show such as a Sister of Plenitude. 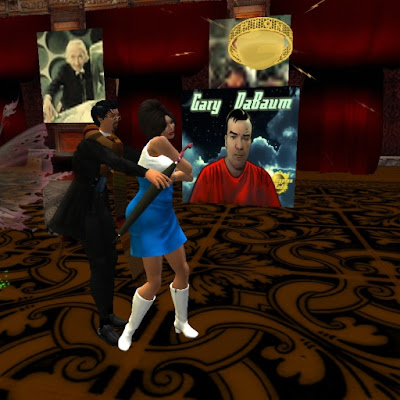 The second thing that made the party special was that Fuzzball Ortega, shown here in the Fourth Doctor's scarf with Eugenia Burton Ortega , was DJing for Krypton Radio as well as those in the Ballroom. He was known on the station as Gary DaBaum. 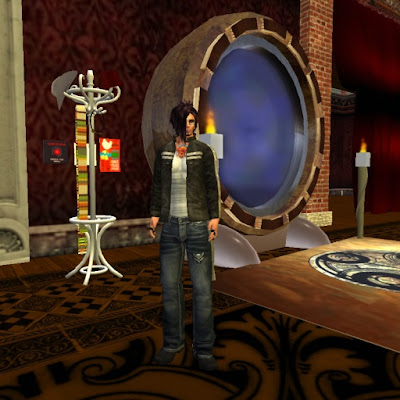 There were a few props set up, such as this gate and a Tardis, as well as pictures of the various incarnations of The Doctor, the plotline explaining changes of actors that the character was able to regenerate after a near-death experience. 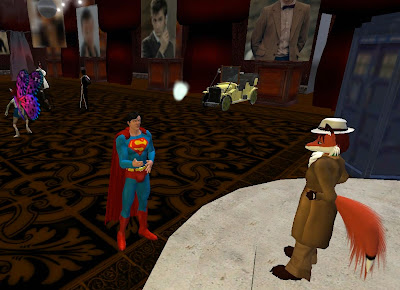 Several of the Justice League Unlimited (JLU) group who run Krypton Radio were present at the event, including Kalel Venkman. Kalel called Fuzz, "our first live DJ. Krypton Radio's been in continous operation since 2009. We're a news site as well." He also stated Krypton Radio also does a number of science fiction and comic-themed radio programs, "It's quite a niche we've found for ourselves. ... We're even on iTunes in the radio section."

Kalel thought Fuzz was "doing a fantastic job. ... Fuzzball will be back on Krypton Radio in two weeks - he's going to get his own regular time slot!"

The event went on longer than the planned two hours before all went their separate ways.