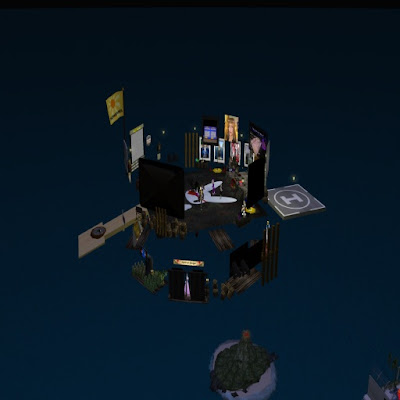 Cyanthia Farshore sent me this picture of Club Cutlass during their Wednesday party, or rather what was left of it after a mishap. The dance floor was still there, but the walls and much of the place just vanished.

In addition to the picture, someone else sent me a short segment of the chat there when Nydia Tungsten showed up to help take care of the mess.

Cynthia Farshore: powder room accident
Nova Manadragon: Huricane Rita hit the club, that's what
Nova Manadragon: took half of it away
Nydia Tungsten: Damn Rita...what did you DO in the powder room to make the walls dissolve?
Nydia Tungsten: o-0
Cynthia Farshore: I guess some of it was not locked so delete struck
Sha: Bless you Nydia :)
Rita Mariner: You know, burritos and a good (windbreaking)!

What probably happened, Nydia later told me, was that the sim the club was in was overloaded with prims, and something had to give. Eventually, the club was restored, but it took returning a number of items to one parcel owner whom had exceeded his allotment.