It's my pleasure to announce, the 2nd Annual Bastogne Tank Rally, sponsored Bastogne's own First Armee! Events will include combat tank races, individual and team events, and a new game based on the internet's World of Tanks! Prizes will be given for both individual events and overall points for World of Tanks tourney. Prize tanks (will be awarded) to top winners!

The Rally begins next Saturday, Sept. 8 at 12PM SLT (Noon), with daily events to be announced, the final day being Sunday Sept 16. 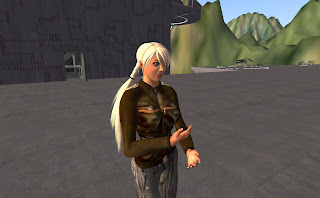 Talking with Vickster about the event, she explained a little more, " Well, its basically a sort of capture the base, or last tank standing team game where the tank driver can also be be gunner. There will be a base for each side, and they try to capture the base of the other team and defend their own from capture. The thing is, teams will be random, made of tanks from both factions, and sorted by classes. So there will be the same number of light and heavy tanks for each team, and (self-propelled) artillery too."

Vickster compared the event to the Massive Multiplayer Online game "World of Tanks," though, "It won't be quite like the game because we can't match it with our scripts …. We'll use flags on the tanks to denote teams, like red and blue or red and green. In the actually game, you are always green and the enemy is red."

"Some facets of the game we can't match, but the key things will be single operator tanks will be allowed, it will be a capture the enemy base or eliminate all enemy tanks, and points will be awarded for kills, being on the winning side, and surviving the battle. There will be a time limit also, and draws will be possible."

She also mentioned plans for a side betting pool, "everyone who wants to can buy in for 20L, and whoever gets the most kills of the round, win or lose, gets the pot." The rally would be an opportunity for Joe Sparrow to show off his tanks, she felt, and thought that there might be additional events, odd ones, "like who can knock down the most lightpoles in Bastogne in two minutes."

New Bastogne's first series of tank rallies was in March 2011.