After about five years in Second Life, Pop Art Lab's founder and director Claus Uriza will be taking a break from the virtual world. And with his departure the group and inworld location will be closing down. In the blog, Claus stated the group and place would close in November. 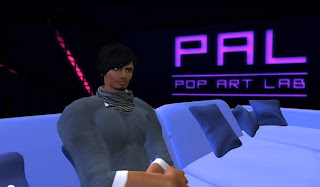 The time has come to step away for a while from virtual worlds. After spending 5 years testing and playing with Second Life and Virtual Worlds platforms, I have decided to take hiatus. It has been a fantastic ride but I don’t think we can push it much further without significant changes in the technologies surrounding these environments.

In this 2010 video, Claus describes himself as a "music librarian" who went through a number of CDs every day, selecting the best ones to play at Pop Art Lab, "ten to twenty new albums each week." He had wanted to provide music available for listening in a 3D environment, the style of the location involving futuristic looking builds. There are four listening booths, each representing different genres: rock, pop, electronic, and R&B/hip-hop. The location itself was built in November 2008, and got a boost in traffic after being listed on the Second Life website for a few months.

Claus gave several reasons for the closing. Streaming could be done using other services, he wanted to "focus on real life and real life clients," and it was his observation the "mass adoption of virtual worlds" had stalled, with few musicians and bands from outside Second Life willing to invest here.

Pop Art Lab's group will continue in Second Life, but future updates will be linked to  posts on Facebook, Google, and Twitter to "focus entirely on posting news about music and shiny new tech in social media" including games and virtual worlds. The Facebook page was no longer focused on Second Life. The group will cease streaming music inworld, except on special occasions.

As a final note, I would like to assure that Pop Art Lab loves the Second Life platform, Linden Lab and the people who create the magic in there. During the years, there have been many issues in the way Linden Lab handle(s) Second Life. I want to point out it’s a wonderful platform they have created: especially the unique democratic tools that give everyone without specific skills a golden opportunity to create and visualize their culture, history and lives.

I sincerely hope all who have helped and still help create wonderful experiences inside virtual environments will flourish in the years to come. Lastly, thanks so much to my team behind Pop Art Lab, because without you none of above would ever have happened!