Yesterday on September 18th, Linden Lab announced two of the four projects outside of Second Life they've been working on. The one that was described with the most detail was "Creatorverse," an application for the iPad. 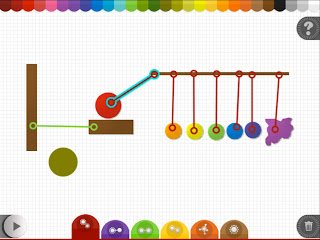 Become an inventor as you design unique creations and then set them in motion. You’ll never know what to expect as you watch your creations bounce, roll, tilt -- or even accelerate on the screen. Let your creations come to life as you play with different joints, forces, motors, and teleporters and then watch what happens next. From the simplest bouncing ball to an elaborate pinball machine, the possibilities for tinkering are endless on Creatorverse.

In their press release, Linden Lab stated it should be available from the Apple App store in a few weeks. There's also a video narrated by Rod Humble (see below), "Here at Linden Lab, we make shared creative spaces." He touted the ability to upload creations for others to use, and edit into something different. 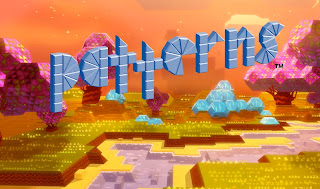 Imagine a 3D Universe of creativity ...
Explore caverns and valleys, while you harvest substances with real world densities. Build large scale structures that reach the sky or bridges that traverse chasms. Challenge real-world physics to see which creations will tumble -- or withstand -- the power of gravity.  It's your universe to shape.

"Patterns" bears a resemblance to Minecraft, though there is the promise of gravity having an affect on what's built. Creatorverse drew some comparisons to a program called "Crayon Physics Deluxe," with it's brightly colored shapes. Prim Perfect called it "very firmly targeted at the tablet market."

Reaction to these products seems mixed. The thread in the official forums is short with a few posts expressing cautious optimism.  The SL Universe thread did as well. Those commenting in response to Prim Perfect and Hamlet Au in their articles were less cheerful. Crap Mariner commented until Linden Lab found a way to make money off the, "your SL tax dollars are paying for others to play Gummy Minecraft and Crayonland." Shockwave Yareach commented of the two, "One is a clone of Crayon Physics Deluxe, which was sold more than half a decade ago. And the other is a clone of Minecraft."

The same day these new products were released, Hamlet Au noted something interesting on Linden Lab's website at http://lindenlab.com/. There were the words Rod Humble used in the earlier video used as a slogan, "Linden Lab, maker of shared creative spaces." He noted how different it was from the old mission statement, "It is our mission to connect us all to an online world that advances the human condition," saying they had become much more modest in this respect.

Hamlet Au called this "A second life for Linden Lab" No longer do they have the idea that they should be "building the metaverse," he felt. Instead, they would be in multiple projects while not loosing sight of Second Life, making products that would allow users to express their creativity. How successful they'll be with these first two products remains to be seen.