A Look at Linden Lab's "Patterns"

Last week, Linden Lab revealed two of the projects they were working on, "Creatorverse" and "Patterns." Seeing the pictures and description of Patterns, some dismissed it as the Lab trying to rip off Minecraft without coming up with anything original. Just after the announcement, gaming Internet magazine IGN published an article by Anthony Gallegos in which he looked at the game and had a few words with Rod Humble about it. His observation was that it was "dramatically different" from the familiar sandbox game. 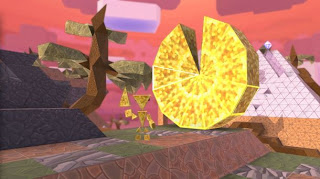 Rod Humble admitted Minecraft was an influence, "So the notion was you take a very simple 3D Creation tool you take that lovely elegance of the resources that's in Minecraft, and them make the whole thing have physics from the ground up." In both, one has an avatar in a world gathering up resources. But in Minecraft the avatar builds tools which it can use. It doesn't in Patterns. Nor are there monsters and hot lava to make survival a question. The world itself is different, alien looking compared to the familiar grass, trees, and hills. And instead of cubes, the world is made up of triangular tiles, as is the avatar. 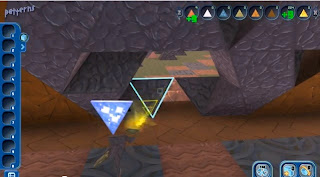 What can one do with the triangular tiles? They can be used to create three dimensional blocks. And these blocks can be used to build larger structures. The tiles can come from a variety of materials, wood, stone, clay, etc. And the hardness and weight of the cubes can have an effect on what one can build. Physics and gravity matter here much more than Minecraft. If one keeps extending a horizontal column of blocks, it will eventually break and fall. And a mostly stone column with a clay base will break sooner than a clay column with a stone one.

When working with the world, sometimes the physics acted in ways that surprised the Linden team. The Lindens are hoping to get users on board to continue to see what can be done with the place, as Humble stated in the video trailer from Linden Lab, he wanted "creators in from the earliest possible moment." A few days after the  IGN article was published, Linden Lab began taking pre-orders for the game's "Genesis version" for $9.95. The page stated those buying would be "entitled to have your name featured in the credits of the game in version 1.0."

Hamlet Au commented that  in giving an advance peek to IGN, it looked like Linden Lab was aiming at gamers rather than users of Second Life as more likely to give Patterns a try. He also states he managed to get in touch with Minecraft's creator Markus Persson. Of Patterns, he thought, "Looks great."

Once again, Patterns Genesis can be pre-ordered at: http://buildpatterns.com/buy/.