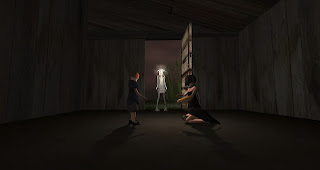 Bryn Oh announced on her blog that her exhibit "Anna's Many Murders" will be closing this month. The exhibition has been on Amase Levasseur's Orginalia sim.


Six months ago Amase offered her region Originalia to host my build Anna's Many Murders and I greatly appreciate her generosity. Sadly the time has come for Anna's to be removed, but new artists will take over the space, so that in itself is something to cheer about. Anna's Many Murders will remain up until the 28th of September so there is still time to see it again or perhaps for the first time.


Bryn Oh's exhibit is the story of "a not so stable person, who sees the dehumanization of those around her and copes in her own way." Besides being on video, it's also in book form.