It was six years ago last month in which an important personal event took place in the course of my Second Life. Only a few months before had I began logging in on a regular basis, visiting places, and going to events such as the 2007 Relay For Life Walk. I came across Luskwood, which became my first hangout, and came across a friend there, who would introduce me to the STA area. Wanting to know more about Second Life, I began looking up websites, which led to blogs, and newsletters. Among them, Second Life Newspaper by JamesT Juno and Dana Vanmoer. 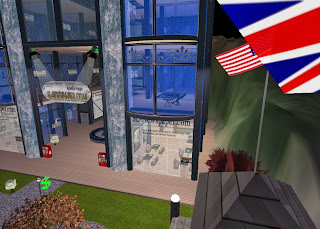 It wasn't long before I saw a request from James and Dana for reader submissions, pictures or articles. I went ahead and sent some of both. After this had been going on for a couple weeks, I got an email asking to drop by their office. And after a brief meeting, I got a job as one of their reporters. This would be my first job in Second Life, and one that would prove to be a success.

I had some experience as a science-fiction writer, doing stories and posting them on a webpage. But here, I was getting more of an audience. In real life, I took pride in keeping up with the news, and here I was helping to cover it. I wore the title of "reporter" proudly. As a reporter for Second Life Newspaper, I had the option of specializing, doing certain kinds of articles. I prefered to do a variety of subjects, people, places, things, events, and more. I even took on an adult subject once, though wrote it so it was fit for a real life newspaper.

Eventually, James and Dana made me the paper's "Office Manager," which meant updating the paper on days they were late doing so. I was happy to have the job, technically being third in charge. Though after a while there was trouble. One of the sponsors was a land baron whom went bankrupt, and the paper never quite recovered. Then James and Dana's real life problems became too much to ignore. And so with great reluctance they made the decision to close Second Life Newspaper.  After talking with the rest of the team, we started a new paper that took over when the old one folded, and I took on a new role: editor. 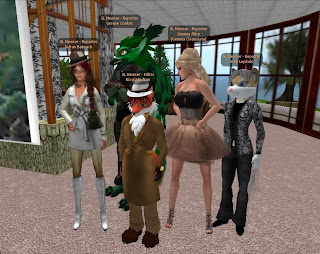 Being the editor meant I would be busier than ever (one reason this column is a month late). I would be the one responsible for the team, and the one paying it's salaries and finding revenue. Though it's also meant prestige. While a few were a little less than happy to see me, especially in the days when the self described tabloid the "Herald" was around, most welcome the sight of the short Luskood fox. The paper has grown in readership from about 2000 readers a month in June 2010 to over 17,000 in October 2013.

Second Life has changed as well. When I began writing, the virtual world was frequently in real life news, even prime time television shows. And it was growing in numbers. We didn’t have the numbers of “World of Warcraft,” but there was plenty of optimism, and Philip and Linden Labs, despite their blunders, still had dreams of a world of possibilities for residents: “Our World, Your Rules.”

Today, Second Life has demonstrated again and again throughout its ten year history an amazing range of possibilities of what can be accomplished here. But seldom does it make major network news any more, usually mentioned only in computer and science journals. The original Lindens are gone, and the Lab has distanced itself from the residents. Much of the optimism older residents once had has been tempered by the Linden's questionable strategy over the virtual world, such as the recent decision to change the terms of service to state they have the right to sell content uploaded by others. The phrase "Our World, Your Rules" has long ceased to be the slogan of the place, replaced with vague statements seen so often with other corporations.

But Second Life’s epitaph has been written time and time before. And despite the setbacks it continues to go on, even prosper. Not because of the Lindens, but the residents whom have demonstrated time and time again their creativity.

Special thanks goes to my teammates, Gemma Cleanslate and Grey Lupindo,  Grease Coakes, Becky Shamen, and of course DrFran Babcock. And thank you to those whom wrote for a while, but had to hang up their pen for one reason for another. You've helped encourage me and keep me going. It's been a great privilege being part of this fine staff of reporters.

A thank you to others who helped inspire me all these years, the friends I've made over time, such as my neighbors at the Sunweaver and Angels Estates, the Relay For Life and the Steelhead community, and others whom are more numerous than I have time to mention.

And of course a thank you to you the readers.

It's been a pleasure covering the news across Second Life for you these six years, and hopefully I'll continue to do so for many years